You are here » Practice » The Penultimate Supper - Listening & Cloze

Monty Python were a British surreal comedy group who created their sketch comedy show Monty Python's Flying Circus, which first aired on the BBC in 1969. Forty-five episodes were made over four series. The group's influence on comedy has been compared to the Beatles' influence on music. 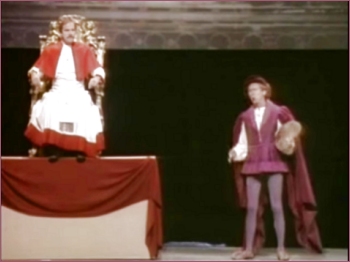 Listen once or twice. Be sure you understand most of it, then make a choice in the "Select" fields, finally click "Show Solutions" to see the complete text. [If you find the listening comprehension difficult, you might read the Solutions first, then try the exercise.]

Follow Eamus on Facebook:
[ Show Solutions ] ---- [ Hide Solutions ]
Renaissance Choir: [Gregorian Chant]
Servant: A Michelangelo to see you, your Holiness.
Pope: Who?
Servant: Michelangelo, the famous renaissance artist whose best-known works include the ceiling of the Sistine Chapel, and the celebrated statue of David.
Pope: Ah. Very well...
Servant: In 1514 he returned to Florence and de...
Pope: All right, that's enough, that's enough, they've got it now!
Servant: Oh.
Michelangelo: Good evening, your Holiness.
Pope: Evening, Michelangelo. I want to have a word with you about this painting of yours, "The Last Supper."
Michelangelo: Oh, yeah?
Pope: I'm not happy about it.
Michelangelo: Oh, dear. It took me hours.
Pope: Not happy at all.
Michelangelo: Is it the jello you don't like?
Pope: No.
Michelangelo: Ah, no, I know, they do have a bit of colour, don't they? Oh, I know, you don't like the kangaroo?
Pope: What kangaroo?
Michelangelo: No problem, I'll paint him out.
Pope: I never saw a kangaroo!


Michelangelo: You see, I like them, they help to flesh out the scene, I could lose a few, you know I could...
Pope: Look! There were only twelve disciples at...
Michelangelo: I've got it! I've got it! We'll call it "The Last But One Supper"!
Pope: What?
Michelangelo: Well there must have been one, if there was a last one there must have been a one before that, so this, is the "Penultimate Supper"! The Bible doesn't say how many people were there now, does it?
Pope: No, but...
Michelangelo: Well there you are, then!
Pope: Look! The last supper is a significant event in the life of our Lord, the penultimate supper was not! Even if they had a conjurer and a mariachi band. Now, a last supper I commissioned from you, and a last supper I want! With twelve disciples and one Christ!


Michelangelo: One?!
Pope: Yes, one! Now will you please tell me what in God's name possessed you to paint this with three Christs in it?
Michelangelo: It works, mate!
Pope: Works?
Michelangelo: Yeah! It looks great! The fat one balances the two skinny ones.
Pope: There was only one Redeemer!
Michelangelo: Ah, I know that, we all know that, what about a bit of artistic license?
Pope: Well one Messiah is what I want!
Michelangelo: I'll tell you what you want, mate! You want a bloody photographer! That's you want. Not a bloody creative artist to crease you up...
Pope: I'll tell you what I want! I want a last supper with one Christ, twelve disciples, no kangaroos, no trampoline acts, by Thursday lunch, or you don't get paid!
Michelangelo: Bloody fascist!
Pope: Look! I'm the bloody pope, I am! May not know much about art, but I know what I like!