Well known in and entitled "99 Red Balloons" is the English version, written by Kevin McAlea, of "99 Luftballons", the second single of the new wave German singer Nena with her band, released by CBS in 1983. 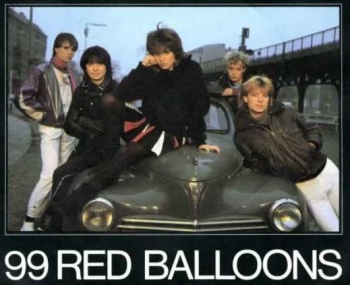 The inspiration for the lyricist, Carlo Karges, was a Rolling Stones concert held in West Berlin, after which thousands of balloons, released into the air, seemed to almost take the form of a spaceship. Karges thought about what might have happened in that Cold War climate, if beyond the wall some generals had had his same thought and launched an attack: here's how this celebrated anti-war song was born.

"99 Luftballons" became one of the most famous songs in German of all times, and was the first German song to enter the US "Top Ten", reaching 2nd place in the charts, with over 500,000 copies sold and winning a gold record in 1984. The English version "99 Red Ballons" remained No.1 in the UK charts for three weeks in March 1984.


Make a choice by clicking on the *Select* button, then click "Show Solutions" at bottom to see the correct answer.
[ Show Solutions ] ---- [ Hide Solutions ]
You and I in a little toy shop
Buy a bag of balloons with the money we've got
Set them free at the break of dawn
'Til one by one, they were gone
Back at base, bugs in the software
Flash the message, something's out there
Floating in the summer sky
Ninety nine red balloons go by

Ninety nine Decision Street
Ninety nine ministers meet
To worry, worry, super-scurry
Call the troops out in a hurry
This is what we've waited for
This is it boys, this is war
The president is on the line
As ninety nine red balloons go by.

Ninety nine knights of the air
Ride super-high-tech jet fighters
Everyone's a superhero
Everyone's a Captain Kirk
With orders to identify
To clarify and classify
Scramble in the summer sky
As ninety nine red balloons go by.

Ninety nine dreams I have had
In every one a red balloon
It's all over and I'm standing pretty
In this dust that was a city
If I could find a souvenir
Just to prove the world was here
And here is a red balloon
I think of you and let it go.