Written by Don Francisco, this Easter song was sung by Dolly Parton, backed by a 100-member choir, at the 23rd Annual CMA Awards in 1989. 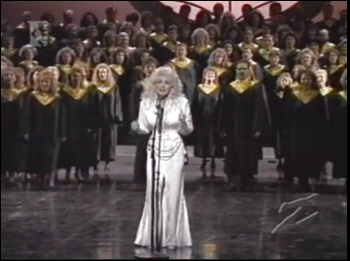 The song, which tells the Resurrection from Peter's perspective, was the #1 song when CCM's first chart was published and it holds the record for the longest-running chart single in the history of Christian radio. This tune won Don Francisco the 1980 Dove Award for Song of the Year and Songwriter of the Year.


Make a choice by clicking on the *Select* button, then click "Show Solutions" to see the correct answer.While listening, it may be difficult to make all the choices, so you may need to listen to the song two or more times. You might also try to fill in without listening.
[ Show Solutions ] ---- [ Hide Solutions ]

Thank you very much, I feel very honored to get to sing this song, on the show tonight, and Mom would say "I hope you get a blessing out of it".

She said, "They've moved Him in the night"
And none of us knows where
The Stone's been rolled away
And now His body isn't there

Oh, that something strange had happened there
Just what I did not know
John believed a miracle
But I just turned to go