You are here » Songs » The Last Unicorn - America

The Last Unicorn was a 1982 animated fantasy film based on a novel by Peter S. Beagle, who also wrote the film's screenplay. The musical score and the songs were composed and arranged by Jimmy Webb, and performed by the group America and the London Philharmonic Orchestra. 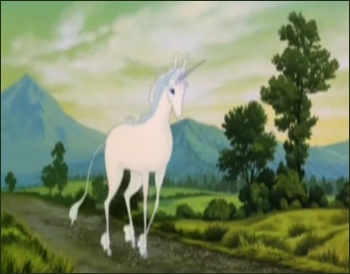 Words and Verbs to insert:


[ Show Solutions ] ---- [ Hide Solutions ]
When the last eagle flies
over the last crumbling mountain
And the last lion roars
at the last dusty fountain
In the shadow of the forest,
though she may be old and worn
They will stare unbelieving
at the last unicorn

When the first breath of winter
through the flowers is icing
And you look to the north
and a pale moon is rising
And it seems like all is dying
and would leave the world to mourn
In the distance hear her laughter
of the last unicorn
I'm alive, I'm alive

When the last moon is cast
over the last star of morning
And the future is past
without even a last desperate warning
Then look into the sky
where through the clouds a path is formed
Look and see her how she sparkles,
it's the last unicorn
I'm alive, I'm alive