The cast of the celebrated sitcom "Friends" meet again for NBC's Tribute to Director James Burrows, a tribute which gathered stars of some of America's most memorable comedies. 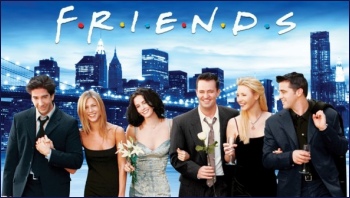 Burrows directed 15 "Friends" episodes, among the most memorable in the history of the ten seasons. The reunion was missing one of the six, Matthew Perry, in London for his playwriting debut with "The End of Longing". A 12-min video with transcription.