Sophie Turner and Dominic Cooper reveal the nominations for this year's EE British Academy Film Awards. BAFTA (British Academy of Film and Television Arts) is an independent charity that supports, develops and promotes the art forms of the moving image. 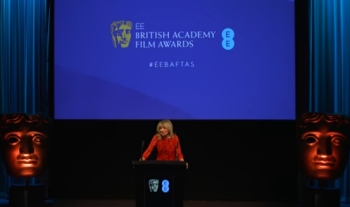 0:00
Good morning, I'm Jane Lush, Chair of BAFTA, and i'm delighted to welcome you to our headquarters here in London for the announcement of the nominations for this year's EE British Academy Film Awards
0:11
At BAFTA we're passionate about film and for the past 70 years it's been our mission to get everybody as excited as we are.
0:18
Our six and a half thousand BAFTA members have watched countless hours of film carefully considering the very best among them as well as the individuals who have achieved great things in their craft.
0:31
Nine categories of our nominations will be revealed now with the full list available at bafta-dot-org. Before we begin, I would like to draw your attention to the EE Rising Star nominees announced last week.
0:44
In addition, I'm delighted to let you know that we'll be filming an expert panel of film journalist discussing all the nominations and between now and the awards will indulge our passion for film and publish these across our social media channels in the coming weeks.
1:02
That just leaves me to introduce two incredibly talented people to announce the nominations: Sophie Turner, who we know well from the hugely successful Game of Thrones and also Xmen Apocalypse
1:12
and Dominic Cooper whose numerous credits include "Preacher", "An Education" and "The Duchess". Dominic and Sophie, please reveal the nominations.
1:27
We're delighted to be here to announce this year's nominations. The nominations for supporting actress are: Hayley Squires for "I, Daniel Blake", Michelle Williams for "Manchester by the Sea", Naomie Harris for "Moonlight", Nicole Kidman for "Lion", Viola Davis for "Fences".
1:47
The nominations for supporting actor are: Aaron Taylor-Johnson for "Nocturnal Animals", Dev Patel for "Lion", Hugh Grant for "Florence Foster Jenkins", Jeff Bridges for "Hell or High Water", Mahershala Ali for "Moonlight".
2:08
The nominations for adapted screenplay are Eric Eeisserer for "Arrival" Robert Shenkkan and Andrew Knight for "Hacksaw Ridge", Theodore Melfi and Allison Schroeder for "Hidden Figures", Luke Davies for "Lion". Tom Ford for "Nocturnal Animals"
2:26
The nominations for original screenplay are: Taylor Sheridan for "Hell or High Water", Paul Laverty for "I, Daniel Blake", Damien Chazelle for "La La Land", Kenneth Lonergan for "Manchester by the Sea", Barry Jenkins for "Moonlight".
2:43
The nominations for director are: Denis Villeneuve for "Arrival", Ken Loach for "I, Daniel Blake", Damien Chazelle for "La La Land", Kenneth Lonergan for "Manchester by the Sea", Tom Ford for "Nocturnal Animals".
2:58
The nominations for leading actor are: Andrew Garfield for "Hacksaw Ridge", Casey Affleck for "Manchester by the Sea", Jake Gyllenhaal for "Nocturnal Animals", Ryan Gosling for "La La Land", Viggo Mortensen for "Captain Fantastic".
3:17
The nominations for leading actress are: Amy Adams for "Arrival", Emily Blunt for "The Girl on the Train", Emma Stone for "La La Land", Meryl Streep for "Florence Foster Jenkins", Natalie Portman for "Jackie".
3:34
The nominations for outstanding British film ore: American Honey, Denial, Fantastic Beasts and Where to Find Them, "I, Daniel Blake", Notes on Blindness, Under the Shadow.
3:48
The nominations for best film are: "Arrival", "I, Daniel Blake", "La La Land", "Manchester by the Sea", "Moonlight".
4:00
And finally, these are the films with the most nominations. Thank you
4:03
Thank You, Dominic and Sophie! The winners will all be revealed at London's Royal Albert Hall on Sunday the12th of February. The ceremony will be broadcast on BBC One, so join us, share our passion, and be part of the story. Thank you