Oscar nominations for the 90th annual awards were announced on Tuesday morning from the Samuel Goldwyn Theater in Beverly Hills, Calif. The introduction was by John Bailey, President of the Motion Picture Academy, and the hosts were Tiffany Haddish and Andy Serkis, who alternated to reveal the nominees in 24 categories. 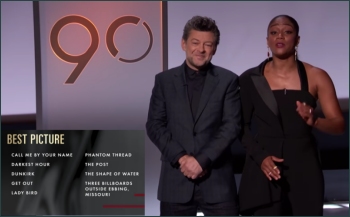 Guillermo del Toro's "The Shape of Water" obtained 13 nominations, Martin McDonagh's "Three Billboards Outside Ebbing, Missouri" nine and "Dunkirk" eight. The Academy Awards will be hosted by Jimmy Kimmel, for the second time, on ABC on March 4, 2018.
Follow Eamus on Facebook: