You are here » Videos » The European Refugee Crisis and Syria

The European Refugee Crisis and Syria

A fine video created by the "Kurzgesagt - In a Nutshell" YouTube channel to explain what has been happening in Europe as a consequence of the Syrian crisis. 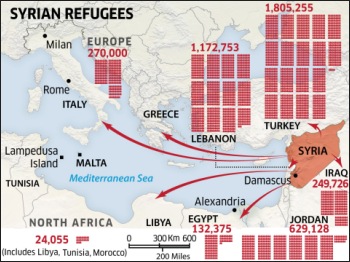 [0:00] In the summer of 2015, Europe experienced the highest influx of refugees since the Second World War. Why? The main reason is that Syria has become the world's top source of refugees. Syria is located in the Middle East, an ancient fertile land settled for at least 10,000 years.

[0:16] Since the 1960s, it's been led by the al-Assad family, who have ruled it as quasi-dictators until the Arab Spring happened in 2011, a revolutionary wave of protests and conflicts in the Arab world that toppled many authoritarian regimes. But the Assads refused to step down and started a brutal civil war.

[0:33] Different ethnicities and religious groups fought each other in changing coalitions. ISIS, a militaristic jihadist group, used the opportunity and entered the chaos with the goal to build a totalitarian Islamic caliphate. Very quickly, it became one of the most violent and successful extremist organizations on Earth.

[0:58] The Syrian population was trapped between the regime, rebel groups, and the religious extremists. A third of the Syrian people have been displaced within Syria, while over four million have fled the country.

[1:08] The vast majority of them reside now in camps in the neighbouring countries, who are taking care of 95% of the refugees, while the Arab states of the Persian Gulf together have accepted zero Syrian refugees, which has been called especially shameful by Amnesty International.

[1:23] The UN and the World Food Program were not prepared for a refugee crisis on this scale. As a result, many refugee camps are crowded and undersupplied, subjecting people to cold, hunger, and disease. The Syrians lost hope that their situation will be getting better any time soon, so many decided to seek asylum in Europe.

[1:42] Between 2007 and 2014, the European Union had invested about €2 billion in defences, high-tech security technology, and border patrols, but not a lot in preparation for an influx of refugees. So it was badly prepared for the storm of asylum seekers.

[1:58] In the EU, a refugee has to stay in the state they arrived in first, which put enormous pressure on the border states that were already in trouble.

[2:05] Greece, in the midst of an economic crisis on the scale of the Great Depression, was not able to take care of so many people at once, leading to terrible scenes of desperate, hungry people on islands usually reserved for tourists.

[2:17] The world needed to come together and act as a united front, but, instead, it has become more divided. Many states downright refused to take in any refugees, leaving the border states alone in their struggle.

[2:29] In 2014, the UK lobbied to stop a huge search-and-rescue operation called Mare Nostrum that was designed to stop asylum seekers from drowning in the Mediterranean.

[2:38] The idea seems to have been that a higher death toll on the sea would mean fewer asylum seekers trying to make the journey. But, of course, in reality, that's not what happened.

[2:47] The perception of the crisis around the world suddenly changed when photos circulated of a dead boy from Syria found lying face down on a beach in Turkey.

[2:55] Germany announced that it will, without exception, accept all Syrian refugees, and is now preparing to take in 800,000 people in 2015, more than the entire EU took in 2014, only to impose temporary border controls a few days later and demand an EU-wide solution.

[3:10] All over the West, more and more people are beginning to take action, although support for asylum seekers has mostly come from citizens, not from politicians.

[3:18] But there are fears in the Western world: Islam, high birth rates, crime, and the collapse of the social systems. Let's acknowledge this and look at the facts.

[3:26] Even if the EU alone were to accept all four million Syrian refugees and 100% of them were Muslims, the percentage of Muslims in the European Union would only rise from about 4% to about 5%.

[3:38] This is not a drastic change and will certainly not make it a Muslim continent. A Muslim minority is neither new nor reason to be afraid.

[3:47] Birth rates in many parts of the Western world are low, so some fear asylum seekers might overtake the native population in a few decades.

[3:54] Studies have shown that even though birth rates are higher among Muslims in Europe, they drop and adjust as the standard of living and level of education rises.

[4:03] Most Syrian refugees already are educated, the birth rate in Syria before the civil war was not very high, and the population was actually shrinking, not growing.

[4:12] The fear that refugees lead to higher crime rates also turns out to be wrong. Refugees who become immigrants are less likely to commit crimes than the native population.

[4:20] When allowed to work, they tend to start businesses and integrate themselves into the workforce as fast as possible, paying more into the social systems than they extract from them.

[4:35] Also, refugees' traveling with smartphones has led to the misconception that they're not really in need of help. Social media and the internet have become a vital part of being a refugee. GPS is used to navigate the long routes to Europe; Facebook groups give tips and information about obstacles in real time.

[4:52] This only proves that these people are like us: if you had to make a dangerous journey, would you leave your phone behind?

[4:58] The European Union is the wealthiest bunch of economies on Earth, well-organized states with functioning social systems, infrastructure, democracy, and huge industries.

[5:08] It can handle the challenge of the refugee crisis if it wants to. The same can be said for the whole Western world.

[5:35] We are writing history right now. How do we want to be remembered? As xenophobic rich cowards behind fences?

[5:41] We have to realize that these people fleeing death and destruction are no different from us. By accepting them into our countries and integrating them into our societies, we have much to gain. There is only something to be lost if we ignore this crisis.

[5:55] More dead children are sure to wash ashore if don't act with humanity and reason. Let's do this right and try to be the best we possibly can be.