You are here » Videos » History of English

The English language developed borrowing from many sources, which produced a huge and varied vocabulary. The video (available on the The Open University YouTube channel) offers a global view of the history of English, from the early invasions to the present. 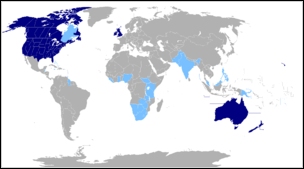 English is a West Germanic language originating from the Anglo-Frisian dialects brought to Britain by Germanic invaders from various areas of what is now northwest Germany, southern Denmark and northern Netherlands.

Initially, Old English was a group of several dialects, reflecting the varied origins of the Anglo-Saxon kingdoms of England. One of these dialects, late West Saxon, at one point came to dominate. The original Old English was then influenced by two waves of invaders, one of speakers of the Scandinavian branch of the Germanic languages, who conquered and colonized parts of Britain in the 8th and 9th centuries; the other was the Normans in the 11th century, who spoke Norman French.

The Norman occupation grafted a more elaborate layer of words from the Romance languages derived from Latin. With the Renaissance, Latin and classical Greek supplanted Norman French as the main source of new words.

With colonialism and technological innovations, the rate of new words entering the language has accelerated enormously, so much so that today we have different varieties of English in the various countries where it is spoken

The transcription of the video is accompanied by notes explaining words and idioms, below the text.
Follow Eamus on Facebook:

[0:04] The History of English In Ten Minutes - Chapter One Anglo-Saxon Or "Whatever happened to the Jutes?"

[0:11] The English language begins with the phrase "Up Yours Caesar!" ( 1 ) as the Romans leave Britain and a lot of Germanic tribes start flooding in, tribes such as the Angles and the Saxons who together gave us the term Anglo-Saxon, and the Jutes -- who didn't.

[0:22] The Romans left some very straight roads behind, but not much of their Latin language. The Anglo-Saxon vocab was much more useful as it was mainly words for simple everyday things like 'house', 'woman', 'loaf' and 'werewolf'.

[0:35] Four of our days of the week were named in honour of Anglo-Saxon gods, but they didn't bother with Saturday, Sunday and Monday as they had all gone off ( 2 ) for a long weekend.

[0:42] While they were away, Christian missionaries stole in bringing with them leaflets about jumble sales and more Latin. Christianity was a hit with the locals and made them much happier to take on funky ( 3 ) new words from Latin like 'martyr', 'bishop' and 'font'.

[0:55] Along came the Vikings, with their action-man words like 'drag', 'ransack' ( 4 ) , 'thrust' and 'die'. They may have raped and pillaged but there were also into 'give' and 'take' two of around 2000 words that they gave English, as well as the phrase 'watch out for that man with the enormous axe.'

[1:33] Latin was still used "ad nauseam" in Church, but the common man spoke English, able to communicate only by speaking more slowly and loudly until the others understood him.

[1:41] Words like 'cow', 'sheep' and 'swine' come from the English-speaking farmers, while the "a la carte" versions- 'beef', 'mutton' and 'pork' - come from the French-speaking toffs ( 9 ) -- beginning a long running trend for restaurants having completely indecipherable menus.

[1:54] All in all, the English absorbed about ten thousand new words form the Normans though they still couldn't grasp the notion of cheek kissing.

[2:00] The bonhomie all ended when the English nation took their new warlike lingo of 'armies', 'navies' and 'soldiers' and began the Hundred Years War against France. It actually lasted 116 years but by that point no one could count any higher in French and English took over as the language of power.

[2:15] Chapter III - Shakespeare - or 'a plaque on both his houses'. As the dictionary tells us, about 2000 new words and phrases were invented by William Shakespeare.

[2:31] He came up with the word 'alligator', soon after he ran off of things to rime with crocodile. And a nation of tea drinkers finally took him to their hearts when he invented the 'hobnob' ( 14 ). Shakespeare knew the power of catch phrases ( 15 ) as well as biscuits.

[2:58] Of course, it's possible other people used these words first but the dictionary writers liked looking them up in Shakespeare, because there was more "cross-dressing" ( 26 ) and people "poking" each other's eyes out.

[3:07] Shakespeare's poetry showed the world that English was a rich, vibrant language with limitless expressive and emotional power, and he still had time to open all those tea rooms in Stratford.

[4:10] In fact, just as "Jonathan begat Merib-Baal and Merib-Baal begat Micah", the King James Bible begat a whole glossary of metaphor and morality that still shapes the way English is spoken today. Amen.

[4:22] Chapter V - The English of Science, or how to speak with gravity

[4:26] Before the 17th century, scientists weren't really recognized, possibly because lab coats had yet to catch on ( 44 ). But suddenly Britain was full of physicists: there was Robert Hooke, Robert Boyle and even some people not called Robert, like Isaac Newton. The Royal Society was formed out of the "invisible college" ( 45 ) after they put it down somewhere and couldn't find it again.

[4:44] At first they worked in Latin. After sitting through Newton's story about the 'pomum' falling to the 'Terra' from the 'arbor' for the umpteenth ( 46 ) time, the bright sparks ( 47 ) realized they all spoke English and they could transform our understanding of the universe much quicker by talking in their own language.

[4:58] But Science was discovering things faster than they could name them: words like 'acid', 'gravity', 'electricity' and 'pendulum' had to be invented just to stop their meetings turning into an endless game of charades ( 48 ).

[5:09] Like teenage boys, the scientists suddenly became aware of the human body coining new words like 'cardiac', 'tonsil', 'ovary and 'sternum' and the invention of 'penis' and 'vagina' made sex education classes a bit easier to follow, though 'clitoris' was still a source of confusion.

[5:26] Chapter VI - English and Empire, or "the sun never sets on the English Language".

[5:32] With English making its name as the language of science, the Bible and Shakespeare, Britain decided to take it on tour, asking only for land, wealth, natural resources, total obedience to the crown and a few local words in return.

[5:44] They went to the Caribbean looking for gold and a chance to really unwind, discovering the "barbeque", the "canoe" and a pretty good recipe for rum punch. They also brought back the word 'cannibal' to make their trip sound more exciting.

[5:54] In India there was something for everyone. 'Yoga' -- to help you stay in shape, while pretending to be spiritual. If that didn't work there was the "cummerbund" ( 49 ) to hide a paunch and, if you couldn't even make it up the stairs without turning "crimson" they had the "bungalow".

[6:18] All in all between toppling ( 53 ) Napoleon and the first World War, the British Empire gobbled up ( 54 ) around 10 millions square miles, 400 million people and nearly a hundred thousand gin and tonics, leaving new varieties of English to develop all over the globe.

[6:34] Chapter VII - The Age of the Dictionary, or "the definition of a hopeless task".

[6:39] With English expanding in all directions, along came a new breed of men called lexicographies who wanted to put an end to this "anarchy", a word they defined as 'what happens when people spell words slightly differently from each other'.

[6:51] One of the greatest was Dr. Johnson, whose "Dictionary of the English Language" took him nine years to write. It was 18 inches tall and contained 42,773 entries, meaning that even if you couldn't read, it was still pretty useful if you wanted to reach a high shelf.

[7:05] For the first time when people were calling you a 'pickle-herring' ( 55 ) , a 'jobbernowl' ( 56 ) or a 'fopdoodle' ( 57 ) , you could understand exactly what they meant and you'd have the consolation of knowing they were all using the standard spelling.

[7:22] It took another 70 years to be finished, after the first editor resigned to be an Archbishop, the second died of TB ( 59 ) , and the third was so boring that half his volunteers quit and one of the ended up in an asylum ( 60 ) .

[7:32] It eventually appeared in 1928 and has continued to be revised ever since, proving the whole idea that you can stop people making up words is complete 'snuffbumble' ( 61 ) .

[7:46] From the moment Brits landed in America, they needed names for all the plants and animals, so they borrowed words like 'raccoon', 'squash' and 'moose' from the Native Americans, as well as most of their territory.

[7:56] Waves of immigrants fed America's hunger for words. The Dutch came sharing 'coleslaw' ( 63 ) and 'cookies', probably as a result of their relaxed attitude to drugs.

[8:04] Later, the Germans arrived selling 'pretzels' ( 64 ) from 'delicatessens', and the Italians arrived with their 'pizza', their 'pasta' and their 'mafia', just like 'mamma' used to make.

[8:51] In 1972 the first email was sent. Soon the Internet arrived, a free global space to share information, ideas and amusing pictures of cats.

[9:00] Before the Internet, English changed through people speaking it, but the net brought typing back into fashion and hundreds of cases of repetitive strain injuries ( 79 ) .

[9:07] Nobody had ever had to 'download' anything before, let alone use a 'toolbar', and the only time someone set up a 'firewall', it ended with a massive insurance claim ( 80 ) and a huge pile of charred wallpaper.

[9:17] Conversations were getting shorter than the average attention span. Why bother writing a sentence when an abbreviation would do and leave you more time to 'blog', 'poke' and 'reboot' when your 'hard drive' crashed?

[9:28] 'In my humble opinion' became IMHO, 'by the way' became BTW, and 'if we're honest that life-threatening accident was pretty hilarious!' simply became 'fail'.

[9:38] Some changes even passed into spoken English. For your information people "frequently asked questions" like "how can 'LOL' mean 'laugh out loud' and 'lots of love'? But if you're going to complain about that then UG2BK.

[9:56] In the 1500 (fifteen hundred) years since the Roman's left Britain, English has shown a unique ability to absorb, evolve, invade and, if we're honest, steal.

[10:03] After foreign settlers got it started, it grew into a fully-fledged ( 81 ) language all of its own, before leaving home and travelling the world, first via the high seas, then via the high speed broadband connection, pilfering ( 82 ) words from over 350 languages and establishing itself as a global institution.

[10:18] All this despite a written alphabet that bears no correlation to how it sounds and a system of spelling that even Dan Brown couldn't decipher.

[10:26] Right now around 1.5 billion people speak English. Of these about a quarter are native speakers, a quarter speak it as their second language, and half are able to ask for directions to a swimming pool.

[10:45] So in conclusion, the language has got so little to do with England these days it may well be time to stop calling it 'English'. But if someone does think up a new name for it, it should probably be in Chinese.