You are here » Videos » How to Pronounce Uranus

How to Pronounce Uranus

The seventh planet from the sun is sometimes pronounced "your-rain-us" to avoid indecent thoughts as if you were saying "your-an-us". An article by CPGrey looks back at history, to discover how the planet got the name it has today. 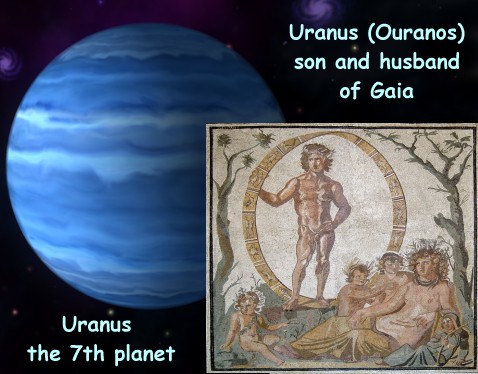 [0:00] Hello Internet! In my last video about Pluto you may have noticed, that I said aloud the names of every planet except one: this one. And that was no accident, but rather the result of careful script editing, because, where I grew up, I learned that the name of the seventh planet is pronounced "yoo-rain-us".

[0:14] Of course to a kid "yoo-rain-us" sounds an awful lot like "your-anus", which is how I, and everyone I knew, ended up saying the name, which is funny when you're a child, but becomes a bit of a problem, when you grow up and try to teach scientific facts about the planet.

[0:27] For example: Uranus has a ring around it. Astronomers have discovered a dark spot on Uranus. Uranus is a gas giant. Uranus is surrounded by methane.

[0:36] There is a solution to this problem, the alternative pronunciation of the name, which goes: "yur-in-us". And most scientists in public roles do use this pronunciation. But for me "yur-in-us" is still problematic. Sure, it's better then your-Anus, but it's still "urine-us".

[0:49] And perhaps I'm just childish, but when someone else says "yur-in-us", I still hear "your-anus" in my head and it just draws more attention to the unfortunate name. The tragedy is, it didn't have to be this way.

[0:59] The seventh planet from the sun is unique because it's the first Planet we discovered. For all of human history, the sixth closest planets were big enough or bright enough to see with just our limited simian eyes.

[1:09] But the next planet was to dim to see until our telescope technology got good enough for British astronomer William Herschel to spot it in 1781. Understandably though, he didn't think he discovered a new planet, since from the rise of modern humans 50 thousand years earlier until that Thursday no one ever had.

[1:24] But discover he did and so choose a name he must! And Herschel, being the good subject of the Crown that he was, christened his new planet "The Georgium Sidis", which means "The Georgian Star". And the George in "The Georgian Star" was King George III, the reigning monarch.

[1:38] While King George liked the name, the rest of the world did not, and decided that perhaps Herschel wasn't the best guy to name the new planet after all, and quickly decided to come up with alternatives of their own.

[1:47] One suggestion was Neptune, which is confusing to us now, but at the time the planet that would become Neptune had not yet been found. A more obvious alternative was to name the planet Herschel after the man who discovered it.

[1:57] Even in Great Britain the name "The Georgium Sidis" proved a bit stuffy for some, so variance like "The Georgian Planet", or just "Georgium" were also used. Though never, as you might have heard, "George".

[2:07] Side note here: while researching this video I found a lot of websites claiming that the seventh planet was almost named "George", but I was never able to find a primary source for this. As best I could tell searching a few documents from the time, no one ever suggested this name.

[2:20] I checked with the Royal Institution who, since 1799, has been promoting sciences from the heart of London and whose videos you should now go watch, and they confirmed the name "George" was never on the table, because to so casual refer to the King at the time would have been disrespectful.

[2:32] And disrespect a monarch is never a good idea, especially one who is slowly losing his mind from a genetic disorder, but that's a story for another time.

[2:40] Anyway, another real suggestion for the new planet's name came from Johann Bode, who suggested the Greek god of the sky. When a colleague of Bode discovered the 92nd element in 1789, he named it "uranium" to support Bode's choice and try and end the debate.

[2:53] Perhaps since these two were German it might not have occurred to them how the word would eventually be corrupted in English. Though it's also hard to know how English speakers in the 1780's and 90's would have pronounced the name.

[3:04] But since the word "anus" was in the language then, it seems unlikely that this particular pronunciation would have been popular. It may also have been pronounced with a flat "a" to sound like "yoo-ra-nus", or something more like the Greek name "oo-ran-ohs".

[3:16] These names competed with each other over decades. For example, still in 1823, the Encyclopedia Britannica lists the planet as "Herschel", notes the alternative names, and then proceeds to carefully word the rest of the article to avoid naming the planet again.

[3:28] But you, dear modern-day viewer, know that eventually these alternatives faded and left this name triumphant, which leaves someone like me with my terrible pronunciation, longing for history to have taken a different path.

[3:39] The name "Herschel" might have made the planet sound a bit like a boring accountant, rather than a very interesting planet it actually is, but this would still be a much better name than what we have. Neptune is obviously a fine planetary name, though picking this might have just delayed the problem.

[3:52] Finally "The Georgium Sidis" is a bit awkward and in sillier moments I wish that Herschel had just been more direct and named it "King George", because how fun would that make it to teach kids the list of planets today: Mercury, Venus, Earth, Mars, Jupiter, Saturn, King George and Neptune.

[4:06] In classrooms, such an unusual name would change the planet from a thing to avoid to a starting point for a discussion about what makes that Planet different, and how astronomy and our view of the universe change and progress over time.

[4:17] But my impractical dreams aside, we're stuck with this name, which for me means choosing between the pronunciation which comes naturally and is terrible, or the unnatural awkward one which is still unsatisfactory. So what's a man to do?

[4:29] In the end, probably follow the lead of the Encyclopaedia Britannica and avoid the name when possible, which is a sad fate for the planet in our solar system with such an interesting story to tell.

[4:50] Seriously people, could we at least agree to switch the pronunciation back to the Greek "oo-ran-ohs"? It's clearly so much better.