President Kennedy's message is as relevant today as it was in 1962. Ambassador Caroline Bouvier Kennedy and her children, Rose, Tatiana, and Jack, reflect on how 100 years after his birth (May 29, 1917, Brookline, Massachusetts, assassinated on November 22, 1963, Dallas, Texas), their father and grandfather continues to inspire others to work, fight, and believe in a better world. The video was released by the JFK Foundation. 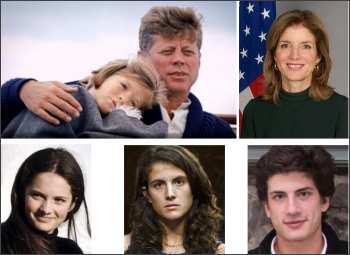 Language Notes and Explanations (alphabetically, of phrases and words in block letters)

0:00
I am Caroline Kennedy, May 29th would be my father's 100th birthday.
0:08
I've thought about him and missed him every day of my life, but growing up without him was made easier thanks to all the people who kept him in their hearts,
0:16
who told me that he inspired them to work and fight and believe in a better world, to give something back to this country that has given so much to so many.
0:28
I remember hiding underneath my father's Oval Office desk when I was little and sitting on his lap on Honey Fitz.
0:33
He would point out the white shark and the purple shark who always followed the boat although I could never quite see them.
0:40
He said they especially liked to eat socks and would have his friends throw their socks overboard which I loved.
0:46
President Kennedy inspired a generation that transformed America. They marched for justice. They served in the peace corps, in the inner cities, in outer space.
0:55
His brothers carried on that work fighting against poverty, violence and war, championing human rights, health care and immigration.
1:04
As my father said in his inaugural address, this work will not be finished in our lifetime. It's up to us to continue to continue to pass these values on to our children and grandchildren.
1:17
[Rose Kennedy Schlossberg:] one of defining relationships in my life is with someone I've never met, my grandfather, President John F. Kennedy. It's a little odd to be connected to someone you don't know, especially when everyone else has access to much of the same information about him that you do.
1:31
Throughout my life, I have been able to connect with my grandfather through the study of history which I know he loved, both studying his life and studying the eras and patterns that fascinated him.
1:42
To me that's where he lives, as a historical figure rooted in the past but also as a person connected to so much of what came after him, his writings and from the stories my relatives have told me.
1:52
But while my grandfather had reverence for the past and the lessons they could impart, he also knew that America was a country where change was possible. we aren't bound solely by tradition if we understand the past with which we are breaking.
2:05
[Tatiana Celia Kennedy Schlossberg:] I'm inspired by my grandfather's sense of equality, his courage in naming the injustices in American society and his call for action.
2:14
His words and his ideals mean so much to me and to the world we live in today, but we're still faced with tremendous inequality and injustice from voting rights to our criminal justice system and mass incarceration.
2:24
My grandfather would be proud of how far we've come as a nation since 1963 but he would have been the first to tell us we have a long way to go.
2:31
I hope everyone regardless of age or party will remember when president Kennedy told America decades ago.
2:36
"This nation was founded by many nations and backgrounds, it was founded on the principle that all men are created equal and the rights of every man are diminished when the rights of one man are threatened."
2:48
[John Bouvier Kennedy Schlossberg:] President Kennedy was elected on a platform of challenges and not promises, not for what he would offer the American people as President but what he would ask of them.
2:55
My favorite speech is the one that president Kennedy gave at Rice University where he makes the case for sending a man to the moon.
3:00
He said that that challenge was worthwhile not because it would be easy but because it would be so hard.
3:07
My generation will inherit a complicated world will countless unsolved problems. Climate change is just one of them.
3:33
But it's the type of challenge that I think my grandfather would have been energized about and eager to solve.
3:18
He cared deeply about the environment, about science and technology and recognized that only if America leads the world in solving global problems can we make sure that it's done right.
3:28
From that speech at Rice and from the space program he helped launch, we can learn a simple but important lesson.
3:33
Great challenges are opportunities, and it is each generation's responsibility to meet those challenges with the same combination of energy, faith and devotion that President Kennedy and his contemporaries displayed decades ago.
3:46
I know they were up to the task but we have to demand action from our leaders and we have to vote.
3:50
[Caroline Kennedy] As his family, we're so proud of what my father stood for during his life and how powerful those values remain today.
3:58
I hope that these reflections on President Kennedy's life and his influence on those of us who share his legacy will encourage people across the United States to look at challenges in their own corner of the world, and seek solutions that heal, lift up the forgotten and make a difference in the lives of others. Thanks for watching.