Michelle Obama's speech at the 2016 DNC

On the opening night of the Democratic National Convention in Philadelphia the first black First Lady stole the show with a powerful, emotional 14-minute speech. 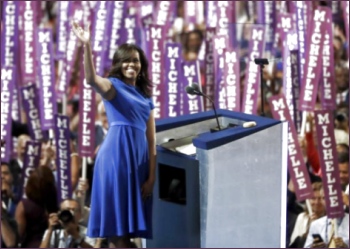 Michelle Obama did not mention Trump's name even once, but some of her remarks were clearly directed at the Republican candidate, as when she said that she wants the next president to be "someone who understands that the issues... cannot be boiled down to 140 characters" - since Donald Trump often makes 140-character statements on his Twitter account, or when she demolished his slogan "Make America Great Again" telling the audience to not "let anyone ever tell you that this country isn't great."