You are here » Videos » Noam Chomsky on Donald Trump 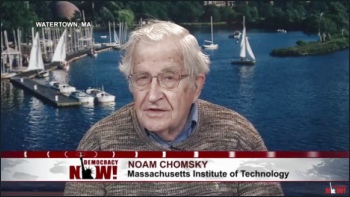 Noam Chomsky is a world-renowned political dissident, linguist and author; his latest book is titled "Who Rules the World?".

0:00
Noam, you were just talking about the issue of climate change. Let's turn to the presidential election and a clip of the presumptive Republican frontrunner Donald Trump, speaking last month when he dismissed concerns about climate change.
0:13
President Obama said the biggest threat to our country's global warming. That's called-give me a break, okay? The biggest threat to our country is nuclear. And we cannot let Iran get a nuclear weapon.
0:28
AMY GOODMAN: That was Donald Trump. Noam Chomsky, your response on that comment and Donald Trump, overall, as a possible president of the United States?
0:36
It's a pretty scary prospect. For one thing, it's not easy to find out what he thinks, if-I doubt-it's not even clear that he knows what he thinks.
0:50
He's a kind of a loose cannon. All kind of statements come out, sometimes some statement plus the negation of that statement within a few minutes. It's kind of a con job.
1:00
But there are some pretty steady features of his position, which, in fact, were expressed in the clip that you ran. One, "There isn't any global warming. Give me a break. That's not an issue."
1:15
So what he's saying is, "Let's race to the precipice as quickly as we can." And we should not-this is not abstract. It's already having major effects, the Republican position. And notice it's not Trump; it's 100 percent of the Republican candidates taking essentially the same position.
1:38
What they're saying, "Let's get rid of the EPA. Let's get rid of regulations. It's all a joke. It's a liberal hoax," and so on. That's having effect.
1:48
The Paris conference last December-the signing was just a couple days ago-aimed at establishing a treaty, which countries would be committed to adhere to, which would put fixed limits on global warming. The limits were nowhere near enough, but at least it was something.
2:08
But even that could not be reached-for one clear, explicit reason: the Republican Congress, which would not accept a treaty that was recognized worldwide, therefore the hope for a treaty was abandoned, in place was put voluntary agreements, obviously much weaker.
2:30
When the Republicans on the Supreme Court just recently beat back a pretty moderate proposed Obama regulation on coal, that again is a message to the world, says, "Don't bother doing anything, the biggest, most powerful country in the world just isn't going to-doesn't care, so you go ahead and do what you like."
2:52
This is all literally saying, "Let's race to the precipice." And it's not remote. It's not a matter of centuries; it's a matter of decades. It's just shocking to see this happening.
3:08
Now, Trump did mention-correctly-that nuclear weapons are a very serious threat. And he picked the absolute worst possible example. Iran is not a threat. Period. The world doesn't regard Iran as a threat. That's a U.S. obsession.
3:28
You look at the global-polls of global opinion taken by Gallup's international affiliate, the leading U.S. polling agencies-agency, one of the questions that they ask is, "Which country is the greatest threat to world peace?"
3:48
Answer: the United States, by a huge margin. Iran is barely mentioned. Second place is Pakistan, inflated by the Indian vote, that's way behind the United States. That's world opinion. And there are reasons for it.
4:04
Americans are protected from this information. The media literally did not report it. You could read it-you hear it on BBC, or you could pick it up on the international press.
4:18
Iran, there's never been any-the threat of Iran, so-called, is actually described, pretty clearly, by U.S. intelligence.
4:30
What they've made clear is that the threat of Iran's nuclear programs-not nuclear weapons, they don't have any, but the threat of Iran's nuclear programs-is that they might provide - serve as a deterrent in the region.
4:48
What does that mean? It means that the states that carry out regular aggression and violence in the region might be deterred if Iran has a capability of someday producing nuclear weapons.
5:05
Which states are those? The United States and Israel. So Iran might be a deterrent to the two rogue states that rampage in the region. That's the threat.
5:16
If there was any concern for the threat, real concern, there would be clear, straightforward ways to eliminate it-namely, move to establish a nuclear weapons-free zone in the Middle East.
5:32
Now that-there are countries that advocate that. Primary among them is Iran. As head of the Non-Aligned Movement, it's been leading the call for a nuclear weapons-free zone. It's strongly supported by the Arab states, has been for decades. In fact, it's supported by about the whole world.
5:55
Why aren't we making steps towards it? Because the United States blocks it. And why does the U.S. block it? Well understood: wants to protect Israel's nuclear weapons capacity from scrutiny and accountability. That's the nuclear threat in the region, not Iran.
6:15
So, yes, there-and, in fact, Trump did not go on to give his answer. What he says, if he means it, is we have to rapidly build up our military forces, which are already overwhelming.
6:29
Obama already has a $1 trillion program outline for modernization of nuclear weapons, which includes what you mentioned correctly earlier, small nuclear weapons, which are regarded by specialists-correctly-as a very serious threat, because there will be a temptation to use them.
6:50
And it's almost certain that any use is going to quickly escalate, and that Doomsday Clock goes right to midnight.
6:58
So Trump is saying, "Yeah, let's make the global warming problem as dangerous and imminent as possible. Let's march towards destruction of the species, like we're destroying everyone else.
7:13
And let's escalate militarization and, at the same time, sharply cut down resources by radical tax cuts, mostly for the rich, which means essentially eliminate pretty much the rest of the government."
7:30
Incidentally, in that position, he's not very different from Paul Ryan, who's considered the intellectual on the Republican side. This is a really astonishing moment in human history, if you look at it.