You are here » Videos » UN Climate Deal: too little, too late?

In December 2015 in Paris nearly 200 countries adopted the UN agreement to address climate change. In the UpFront special of Al Jazeera English on the subject, Christiana Figueras answers some questions of her host. 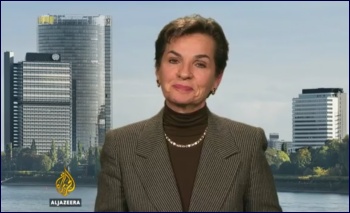 Proponents of the Paris agreement say the deal signals a global commitment to reduce greenhouse gasses, but critics sais it was "too little, too late". Journalist Mehdi Hasan asks UN Climate Chief Christiana Figueres her opinion on just that.

[0:00] The Paris climate change agreement adopted in December has kindled "a huge flame of hope": those were the words of the UN's top official for climate change Christiana Figueres. Critics of the agreement, however, have called it "worthless, and weak"; so is the UN Paris deal an historic victory or a dangerous distraction?

[0:20] Christiana Figueres joins me now from Bonn. Thanks for joining me on "UpFront". You're standing down this summer as UN Climate Change chief after six years in the job, six long years in which the planet has gotten hotter. What would you say to those who think therefore that your tenure, for all its good intentions, has been one of inaction or failure?

[0:42] Well, first of all thank you very much for inviting me to be here today. Two things, I think, have been the major lesson over the past few years. The first, that it is completely impossible, unrealistic and irrational to expect that a problem that has accumulated over a hundred or maybe even a hundred and fifty years can actually be fixed in one year or in fact even in one or two years.

[1:10] This is going to take several decades, I'm afraid, because what is required here is a transformation of the global economy.

[1:20] And the second thing that we have actually learned over the past six years, which is that very much at the basis of the Paris Agreement, is that it is completely untrue that we have to choose between addressing climate change and supporting the development of countries.

[1:35] So Paris actually puts in place a pathway that is going to take us over the next 5, 10 perhaps 15 years, toward the... addressing climate change in an effective way, in... from the perspective of the countries.

[1:50] You praised the Paris accord as a success, the deal that was done in Paris in December, but James Hansen, the legendary NASA scientist who first raised awareness of climate change in the 1980s, described it as a fake, a fraud. Friends of the Earth called it "not sufficient, not strong enough, much too vague". Oxfam called it "a frayed life-line to the world's poor".

[2:12] Well, I wonder what they would have said if we had actually failed to come to any agreement in Paris. And, you know, it is very true, let me, say that from a purely scientific point of view, we are really getting to the last, last minutes in which we can credibly address climate change I am no one to dispute that.

[2:36] The issue however is that science has very very stringent timelines that in an ideal world we would certainly want to abide by. But that when you put into the reality of the world you put policy, you put the evolution of policy, the evolution of an economic system that has been in place for 150 years, then you get a very different timeline.

[3:19] No, which is exactly why those contributions are actually quite strong because they don't come from an external force. They're not anyone holding a pistol to anybody's head, they stem from the national interests and they are completely coherent and consistent with national development priorities. Hence, that is the most powerful lever, is what the national interest is.

[3:45] You say these pledges are strong because they're based on national interest. Let me quote to you what Naomi Klein who I interviewed earlier on the show said about this particular aspect of the Paris Court.

[3:53] She said it was a "potluck approach" because the UN didn't want to tell governments what they were going to do, they just said "ok, everybody go home, make your best effort, fingers crossed."

[4:05] The problem is if you add up all the voluntary national targets, it actually leads us to three or four degrees of warming. She's right, isn't she?

[4:14] No, she's not. Naomi is a fantastic analyst and a good friend but here she's not- she's not right because actually if implemented the current set of contributions would lead us to anywhere between 2.7 or 3 degrees, which is much better than the 4 to 5 degrees increment that we had before these contributions. So, better...

[4:41] because we had- we knew ahead of time that these collection of first efforts was not gonna get to 1.5, that is precisely why the Paris Agreement has understood that these contributions are the first but certainly not the last step.

[4:59] they are the floor, they're not the ceiling and the Paris agreement actually puts in place a pathway of constant improvement over the next decades to actually get to peeking and then to a rapid descent until we're at the 1.5 pathway.

[5:14] What about Naomi Klein's main argument, is something you touched on earlier, that it's capitalism versus the climate that there is no way of stopping catastrophic climate change within our current liberal economic system

[5:29] because the whole point of a de-regulated free market economy, or free-market system is to find resources and exploit them regardless of the environmental costs. Unless you change the economic system there's no way you can beat climate change.

[6:10] And you have a growing number of corporations that have actually already committed to either being a 100% renewable, or even better yet, already getting onto the path of 1.5.

[6:21] So let me tell you the private sector cannot guarantee that we're gonna get onto the 1.5 pathway but I tell you one thing: without them it is absolutely clear that we're not going to get there.

[6:32] You've said you think the next UN Secretary General should be a woman. should that woman be you? You've been called a woman to watch and one of the most promising candidates.

[6:42] It's not within my plans.
But it should be a woman, you believe.
I think so. It is about time, and there are many wonderfully capable women out there.

[6:53] Christiana Figueres, thanks for joining me on UpFront.
Thank you!
That's our show, UpFront will be back next week