Shakespeare, of all poets, made the iambic pentameter a stronghold of English poetry. The videos examines why the iamb of all feet was most congenial to the Bard's great poetry, both in the sonnets and plays. 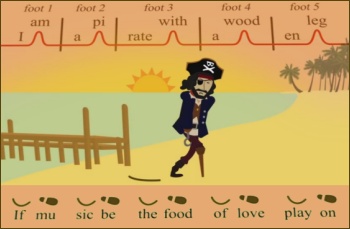 [0:08] To someone first encountering the works of William Shakespeare, the language may seem strange. But there is a secret to appreciating it. Although he was famous for his plays, Shakespeare was first and foremost a poet.

[0:23] One of the most important things in Shakespeare's language is his use of stress. Not that kind of stress, but the way we emphasize certain syllables in words more than others.

[0:34] We're so used to doing this that we may not notice it at first. But if you say the word slowly, you can easily identify them. Playwright, computer, telephone.

[0:48] Poets are very aware of these stresses, having long experimented with the number and order of stressed and unstressed syllables, and combined them in different ways to create rhythm in their poems.

[1:00] Like songwriters, poets often express their ideas through a recognizable repetition of these rhythms or poetic meter. And like music, poetry has its own set of terms for describing this.

[1:25] One line of verse is usually made up of several feet. For example, a dactyl is a metrical foot of three syllables with the first stressed, and the second and third unstressed.

[1:37] Dactyls can create lines that move swiftly and gather force, as in Robert Browning's poem, "The Lost Leader."
"Just for a handful of silver he left us.
Just for a rib and to stick in his coat."

[1:51] Another kind of foot is the two-syllable long trochee, a stressed syllable followed by an unstressed one. The trochees in these lines from Shakespeare's "Macbeth" lend an ominous and spooky tone to the witches' chant.
"Double, double, toil and trouble; fire burn and cauldron bubble."

[2:10] But with Shakespeare, it's all about the iamb. This two-syllable foot is like a reverse trochee, so the first syllable is unstressed and the second is stressed, as in
"To be, or not to be."

[2:24] Shakespeare's favorite meter, in particular, was iambic pentameter, where each line of verse is made up of five two-syllable iambs, for a total of ten syllables. And it's used for many of Shakespeare's most famous lines:
"Shall I compare thee to a summer's day?"
"Arise fair sun, and kill the envious moon."

[2:46] Notice how the iambs cut across both punctuation and word separation. Meter is all about sound, not spelling.

[2:55] Iambic pentameter may sound technical, but there's an easy way to remember what it means. The word iamb is pronounced just like the phrase, "I am." 3:05] Now, let's expand that to a sentence that just happens to be in iambic pentameter.
"I am a pirate with a wooden leg."

[3:15] The pirate can only walk in iambs, a living reminder of Shakespeare's favorite meter. Iambic pentameter is when he takes ten steps.

[3:24] Our pirate friend can even help us remember how to properly mark it if we image the footprints he leaves walking along a deserted island beach: A curve for unstressed syllables, and a shoe outline for stressed ones.
"If music be the food of love, play on."

[3:42] Of course, most lines of Shakespeare's plays are written in regular prose. But if you read carefully, you'll notice that Shakespeare's characters turn to poetry, and iambic pentameter in particular, for many of the same reasons that we look to poetry in our own lives.

[3:57] Feeling passionate, introspective, or momentous. Whether it's Hamlet pondering his existence, or Romeo professing his love, the characters switch to iambic pentameter when speaking about their emotions and their place in the world.

[4:15] Which leaves just one last question. Why did Shakespeare choose iambic pentameter for these moments, rather than, say, trochaic hexameter or dactylic tetrameter?

[4:26] It's been said that iambic pentameter was easy for his actors to memorize and for the audience to understand because it's naturally suited to the English language.

[4:36] But there might be another reason. The next time you're in a heightened emotional situation, like the ones that make Shakespeare's characters burst into verse, put your hand over the left side of your chest.