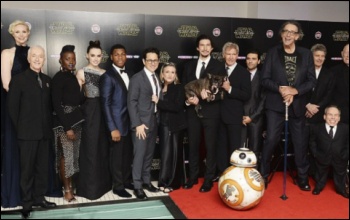 When she was only two years old, her parents divorced and her father married Elizabeth Taylor. She attended the Beverly Hills High School but dropped out of studies at the age of 15 to become an actress, then attended the Central School of Speech and Drama in London for 18 months, and the Sarah Lawrence College, that she left for the Star Wars saga. In 1983 she married singer Paul Simon, but their marriage lasted only a year. In 1991 she began a relationship with agent Bryan Lourd, from whom he had a daughter, Billie Lourd, born in 1992. Their relationship ended in 1994 when he abandoned her for a man. On December 23, 2016, during a transatlantic flight from London to Los Angeles, Fisher suffered a stroke 15 minutes before landing, and died on December 27 at the age of 60. The next day her mother Debbie Reynolds had a stroke and died a few hours later in hospital. Carrie's death was deeply felt all over the world by all those who had loved and never forgotten her unique rendering of Princess Leia.

0:00
It's been a mere 24 hours since news broke out about the tragic death of Carrie Fisher, and now her beloved Star Wars family has spoken out on a light that will always continue to shine.
0:06
She was so much more than just Princess Leia. Carrie's Star Wars family, past and present, has paid tribute to her in the most heartfelt way.
0:16
Heaven gained one hell of a heroine yesterday and millions have since paid their condolences to Carrie Fisher: but the people whom she's grown closest with over the years have shared their deepest heartfelt messages.
0:28
Carrie's Star Wars co-stars past and present have tweeted multiple photos, messages, and the fondest memories of the late actress,
0:35
Her beloved space-twin Mark Hamill, who played Luke Skywalker alongside her in the original film, penned a heartfelt letter in remembrance, writing:
0:42
[quote] "it's never easy to lose such a vital, irreplaceable member of the family but this is downright heartbreaking… she was OUR princess, , and the actress who played her blurred into one gorgeous, fiercely independent and ferociously funny, take-charge woman who took our collective breath away.
1:00
She played such a crucial role in my professional and personal life, and both would have been far emptier without her. I am grateful for the laughter, the wisdom, the kindness, and even the bratty, self-indulgent crap my beloved space-twin gave me through the years. Thanks Carrie, I love you.
1:15
The film's creator and director George Lucas also recalled working with Carrie writing: "Carrie and I have been friends for most of our adult lives. She was extremely smart; a talented actress, writer and comedienne with a very colorful personality that everyone loved.
1:31
In Star Wars she was our great and powerful princess - feisty, wise and full of hope in a role that was more difficult than most people might think."
1:39
Her on-screen love interest Harrison Ford, who played Han Solo, wrote: "Carrie was one of a kind… brilliant and original, funny and emotionally fearless. She lived her life bravely. My thoughts are with her daughter Billie, and her mother Debbie, her brother Todd and her many friends. We will all miss her."
1:57
Many of Carrie's other original Star Wars co-stars also paid tribute to her including Peter Mayhew, Anthony Daniels, Billy Dee Williams, Warwick Davis and David Prowse who played Chewbacca, C-3PO, Lando Calrissian, Wicket the Ewok and Darth Vader, respectively, remembering her as a "dear friend, beloved co-star and the brightest light in any room she walked into".
2:17
The "Star Wars - Force Awakens" cast and crew also penned emotional statements and remembrance of Carrie including director J.J. Abrams, Lupita Nyong'o, Andy Serkis, and more recent heroine Daisy Ridley who plays Ray.
2:29
Daisy released a statement via "Deadline" writing [quote] "Devastated at this monumental loss. How lucky we all are to have known her and how awful that we have to say goodbye."
2:37
The cast and crew from the series most recent film "Rogue One" have also shared their condolences including the film's director Gareth Edwards and stars of the film Felicity Jones and Diego Luna.
2:46
Many have also showered Carey's daughter Billie Lourd with infinite amounts of love during this tough time, including her "Scream Queens" co-star Ariana Grande, Leah Michelle, Taylor Lautner and John Stamos.
2:59
Ariana shared a photo of her and Billy writing "I love you so so very much @praisethelourd. My heart is with you and your family."
3:07
Her rumored fling Taylor Lautner posted a photo of the two as well writing "This girl is one of the strongest, most fearless individuals I've ever met. Absolutely beautiful inside and out. I'm lucky to know you. @praisethelourd. Love, me.
3:20
As we've come to find out and what many have already known Carrie Fisher left an immense impact on family, friends and co-stars, including fans around the world, and is remembered by millions as the brightest light in the galaxy that will forever shine.
3:34
So right now it seems like the perfect time to share some love for Carrie and her family during this tragic time, and you can all do that right down here in the comments. After that you can click over here to check out even more celebs who shared their love for the late actress
3:47
Thanks for checking in with me here on "Clevver News", I'm your host Tom Plumley, and "May The Force Be With You".